I find that this is handy - http://www.sahjasiamese.com/index_files/foodcomparisonchart.htm

Cats are carnivores, you should not feed them rice or vegetables or fruits.
3 comments:

Another cattery has asked help to care for this guy, I just said yes. He's a british shorthair! I can't say no to that breed. Longhair breed susah sikit nak jaga, you have to comb the hair and stuff. I don't have the time to groom them. Nak bagi mandi pun lama. Other shorthair breed suka lompat-lompat pulak... lepas tu ada breed yang bising. So bsh ftw!
I kinda tried using his name Esprit but after awhile, got tired of mispronouncing it so it became Epit. Heh.
He came to me not in good condition. So it's become my mission to have him look the a proper male bsh. Masculine, huge, smouldering male bsh. I'm giving myself and him 3 months. We'll see how he turn out. 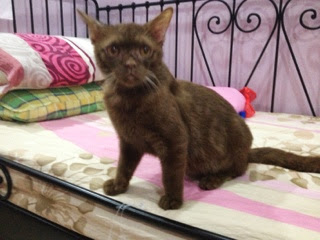